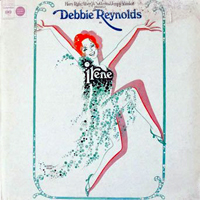 (4 / 5) Encouraged by the success of the 1971 Broadway revisal of No, No, Nannette, producer Harry Rigby and colleagues reworked and mounted Irene, a musical that had been a hit in 1919 but had hardly ever been performed since the 1930s — even though it included such Harry Tierney-Joseph McCarthy songs as the monster hit “Alice Blue Gown.” The buoyant headliner of the new Irene was Debbie Reynolds, who gave her pluckiest performance since the film version of The Unsinkable Molly Brown and helped turn the show into a hit. Happily, her gutsy portrayal is well preserved on the cast album. Reynolds’ rendition of “The World Must Be Bigger Than an Avenue,” a new song by Wally Harper, is dynamite. Other outstanding moments belong to George S. Irving in a Tony Award-winning performance as “Madame Lucy,” and Patsy Kelly, direct from her Tony-winning triumph in No, No, Nanette, as Irene’s mother. More star presence is provided by Monte Markham as Donald S. Marshall III and Ruth Warrick as his mother. The recording was artfully produced by the great Thomas Z. Shepard at the peak of his expertise. — Gerard Alessandrini 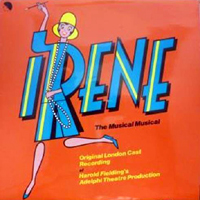 (4 / 5) This bouncy, well-performed London Irene stars the excellent Australian performer Julie Anthony. The arrangements and orchestrations are almost identical to those of the Broadway revisal, and they sound bright and crisp as recorded here. Under conductor Ralph Burns’ excellent baton, the chorus numbers are particularly spirited and exciting. As Irene, Anthony shows off a thrilling voice with much gusto, and she can belt out a show-stopper and then turn around and deliver a soft, tender ballad very effectively. The strong supporting cast includes Jon Pertwee, Jessie Evans, and Eric Flynn. As Donald, Flynn does an excellent job with a lovely old song that wasn’t in the Broadway production, “I Can Dream, Can’t I?” Another added treat is the ballad “If Only He Knew,” persuasively rendered by Anthony. This is an unusual London cast album in that the singers sound like authentic American musical theater performers, and the sound quality of the recording is superb. — G.A.