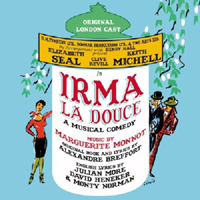 (4 / 5) This recording was not released in CD format until 2008. It will come as something of a revelation to those who only know Irma la Douce from the original Broadway cast recording. While the three London stars — Elizabeth Seal, Keith Michell, and Clive Revill — and director Peter Brook were all imported to Broadway, the London recording offers a great deal of dialogue that reveals the story with more clarity than on the subsequent Broadway cast album (see review below). Many of the lyrics are different, and there is a truly charming Act II reprise of “Our Language of Love,” in which Irma expresses her feelings about Nestor while he is in prison. In the ballet, we can hear the prison break, and we learn of Irma’s pregnancy and other plot details. The only disappointment is Seal’s delivery of the title song; she does a much better job on the Broadway recording. Other than that, the London LP captures the essence of a most unusual show, and the three leads are perhaps a little warmer and less slick here than they became by the time the show reached New York.  — Jeffrey Dunn 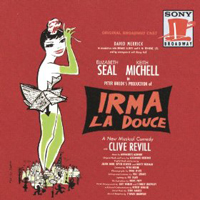 (4 / 5) One of very few French musicals to earn success in London and in New York,  Irma la Douce went through some changes in each country, but this recording retains enough Gallic charm mixed with Broadway know-how to satisfy all but the most curmudgeonly of FrancophiIes. That’s particularly evident in the orchestrations of André Popp (additional orchestrations by Robert Ginzler, dance music by John Kander), with the obligatory accordion and a stylish xylophone often dominating. The overture is an old-fashioned attention-grabber. The opening number is “Valse Milieu,” in which Clive Revill as Bob-Ie-Hotu — who narrates the story and plays numerous other roles — sets up the plot and defines the French words that are sprinkled throughout the piece: poule for prostitute, mec for pimp, grisbi for money, and so on. The fanciful tale tells how one of Irma’s clients, Nestor, falls so in love with her that he wants to become her only client. The music is by Marguerite Monnot, composer of many songs popularized by Edith Piaf; the original French book and lyrics by Alexandre Breffort were cleverly adapted into English by Julian More, David Heneker, and Monty Norman. London leads Elizabeth Seal, Keith Michell, and Clive Revill also starred in the Broadway production. Seal, who won a Tony Award for her performance, is a singing actress whose personality jumps from a recording. Michell as Nestor has a beefy, full-bodied sound in the love duets, is comedic in “Wreck of a Mec,” and is magnificent in the haunting “From a Prison Cell.” Revill is especially funny in the climactic “But.” The all-male ensemble is excellent in “Sons of France,” “She’s Got the Lot,” and “Christmas Child.” There is also an extended sequence that ends up in an “Arctic Ballet” complete with penguins! It doesn’t make much sense, but the dance music is terrific. In his New York Herald Tribune review of Irma la Douce, Walter Kerr wrote: “If an original cast album is made available in your neighborhood, get it.” Take Mr. Kerr’s advice. — J.D.