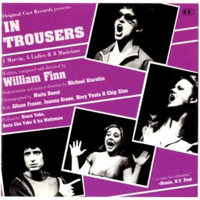 (5 / 5) Long before the William Finn character known simply as Marvin experienced joy and pain in March of the Falsettos, Falsettoland, or the amalgam known and celebrated as Falsettos, he was introduced in this 1979 work. The show never achieved the prominence of Finn’s other “Marvin Musicals,” but it’s by far the most tuneful. Finn’s lyrics here are sometimes tough to understand; the opening song, “Marvin’s Giddy Seizures,” suggests that In Trousers will be about an epileptic rather than a bisexual who’s leaving his wife for a man (Whizzer, who never appears in the show, although he’s frequently referenced). But, oh, what a glorious set of Finn melodies! “High School Ladies at Five O’Clock” is an infectious number that will have you playing it over again and again. “Whizzer Going Down” might be described as an Americanized version of Edith Piaf’s irresistible “Milord,” and what could be a higher compliment than that? “How Marvin Eats His Breakfast” doesn’t just have a memorable melody, but also a fascinating lyric: We get a young child’s point of view in wanting to eat right now. In this song and others, Chip Zien as Mavin is sensational in his first major role. — Peter Filichia