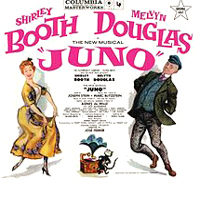 (4 / 5) For years, cast album collectors begged Columbia to issue this heartbreaker on CD. Finally, Fynsworth Alley got the rights and released a CD in 2002. In adapting Sean O’Casey’s Dublin tragicomedy Juno and the Paycock to the musical stage, composer-lyricist Marc Blitzstein and librettist Joseph Stein showed considerable theatrical savvy and the utmost integrity. Their thrilling score opens with “We’re Alive,” a jaunty march that ends in tragedy and turns into a dirge. Immediately after it comes “I Wish It So,” one of three arresting ballads assigned to the lucky singer Monte Amundsen in the role of Mary Boyle. Then Shirley Booth acts “Song of the Ma” to the core (its verse is by O’Casey himself), and her approximate note-hitting proves to be just right for this overburdened character. The rest of the cast is also amazing: Melvyn Douglas (like Booth, he has not much of a singing voice but is a wonderful actor), Tommy Rall, Jean Stapleton, Nancy Andrews, Sada Thompson, Jack MacGowran, and Loren Driscoll (who holds one of the longest notes ever attempted at the end of “One Kind Word”). First-class all the way, the album was produced by Goddard Lieberson; the orchestrations are by Robert Russell Bennett, Hershy Kay, and Blitzstein; and the conductor is Robert Emmett Dolan, an underappreciated Broadway composer himself. Blitzstein does overreach toward the end with a pompous “Hymn” and some noisy ballet music (Agnes De Mille choreographed), but even here, one admires his ambition and his refusal to cheapen the material with standard audience-pleasing tactics. — Marc Miller