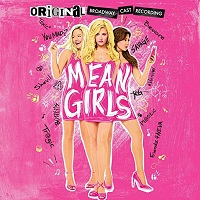 (3 / 5) Mean Girls has been a major staple in pop culture ever since the film was released in 2004. With instantly quotable dialogue and numerous iconic moments, the movie is so beloved that it was only a matter of time before the property made its way to the stage as a splashy musical. The plot is similar to Heathers, if a little more family friendly in its delivery: Having spent most of her young life in Africa with her zoologist parents, Cady Heron is thrust into a suburban U.S. high school, where she’s quickly lured in by the appeal of the school’s popular clique, The Plastics , and its glamorous and calculating leader, Regina George (Taylor Louderman). With legendary comedy writer Tina Fey adapting her original screenplay, her husband Jeff Richmond composing the music, and Tony nominee Nell Benjamin providing the lyrics, expectations for the musical were high, but the final product proves to be a mixed bag. Rather than stick to one genre of music, Richmond chose to incorporate golden-age Broadway, rock, bubble gum pop, salsa, and more to reflect the different social cliques of high school. This  isn’t a bad idea, and the mixing of different musical styles has certainly been done successfully in many previous shows. But even though John Clancy’s versatile orchestrations accommodate the various genres, they often clash with each other, and many of the songs lack the sort of structure that would allow them to build to a satisfying conclusion. Meanwhile, Benjamin’s lyrics are clever and well crafted but rarely have the bite of Fey’s dialogue (though little of that is presented on the recording). Still, for the most part, the album is an enjoyable listening experience thanks to Richmond’s talents for creating catchy ear worms, as well as the performances of exceptionally talented cast, who do a commendable job of making their mark on characters so strongly associated with the film portrayals. Most successful are Louderman as queen bee Regina and Grey Hansen as the comfortably flamboyant Damien; she revels in Regina’s viciousness, often singing in a low whisper before crescendoing to a commanding high belt, as in the vengeful “World Burn,” while he gives the album Broadway sparkle with his natural comedic timing and brassy vocals. However, it’s Kate Rockwell as Karen, the ditzy member of the Plastics, who has the best song in the score, “Sexy” — a paean to achieving female empowerment by dressing up in skimpy Halloween costumes. Here, Richmond brings musical theater know-how to the bubble gum music, and Benjamin’s lyrics are genuinely funny (“This is modern feminism talkin’ / I expect to run the world in shoes I cannot walk in”). In this song, Mean Girls the musical briefly reaches the same satirical heights as its source material. — Matt Koplik