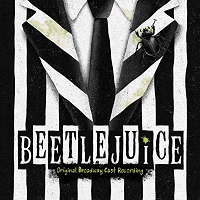 (4 / 5) How far will a musical go to give you a good time? In the case of Beetlejuice, all the way to the Netherworld and back. Based on Tim Burton’s cult ’80s classic movie of the same title, the show centers around its title character, a fast-talking and wisecracking demon who helps a recently deceased couple try and scare away the family that’s recently moved into their home (though he has his own agenda for doing so). While Burton’s film famously delivered its morbidity with a wry sense of humor that earned it a PG rating, the musical adaptation takes a much zanier, PG-13/R approach. Eddie Perfect’s score has some classic Broadway flourishes sprinkled throughout, but it mostly leans to ’80s-style pop and musical theater faux-rock, which Kris Kukul elevates with his rollicking arrangements and orchestrations. Perfect’s lyrics are also reasonably well crafted, walking the line between wit and crassness. As Beetlejuice, the endlessly energetic Alex Brightman heavily indulges  in vocal fry (as a respectful nod to Michael Keaton’s performance in the film) and devours songs like “The Whole ‘Being Dead’ Thing” and “Say My Name” to enjoyable effect. Kerry Butler and Rob McClure are also terrific as the recently deceased couple, Barbara and Adam. They embrace their characters’ intentional blandness in “Ready, Set, Not Yet” without being bland themselves, giving Brightman even more comedic fodder to play with in all of their tracks together. Leslie Kritzer is delightfully wacky as Delia; her “No Reason” duet with Sophia Ann Caruso’s Lydia has some of Perfect’s best lyrics, and is a major highlight of the recording. As the death-obsessed Lydia, Caruso displays a thrillingly unique voice that’s put to good use in her solos “Dead Mom” and “Home.” Enjoyable as the album is, there’s one gripe: Because the score is so eager to entertain, most of the extremely lively songs are packed back to back against each other, and are given no room to breathe. This makes for a rather overwhelming listening experience, with some numbers offering diminishing returns (“Creepy Old Guy” and “That Beautiful Sound” for example). The album may also repel listeners who wanted a more direct replica of the movie, or who prefer their musical comedy without references to cocaine and “ghost zombie Jesus.” But those who are willing to accept Beetlejuice on its own terms are in for a highly entertaining listen. — Matt Koplik