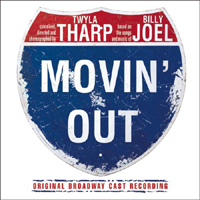 (4 / 5) In the old days, composers hoped that theatergoers would go out humming what they’d just heard. With shows like Movin’ Out, however, the idea is that the audience will be humming the show’s melodies on the way in. Sure, this is an original cast recording, but the singer featured on it did not introduce the songs that make up the score; every rock ‘n’ roll number that Michael Cavanaugh warbles and plays on piano with exuberance was popularized by singer-songwriter Billy Joel on albums that have sold in the millions. Cavanaugh hews to Joel’s phrasing and inflections while bringing his own distinctive talents to the likes of “Just the Way You Are,” “Uptown Girl,” “We Didn’t Start the Fire,” “Captain Jack,” and “I’ve Loved These Days.” Additionally, there’s some thrilling instrumental work by the sidemen, particularly by saxophonist John Scarpulla. While this is an expertly produced aural document of a spectacular and important show, it’s obviously incomplete in one major respect: Director-choreographer Twyla Tharp created a visual masterwork around Joel’s triumphs as a troubadour-chronicler of his troubled pre- and post-Vietnam times but, of course, there was no way for CD producers Tommy Byrnes and Mike Berniker to make an audio recording of Tharp’s extraordinary staging and dances. So this cast album is a must-have with that qualification, and one more: Needless to say, if you want the definitive recordings of these songs, you should pick up Joel’s versions. — David Finkle