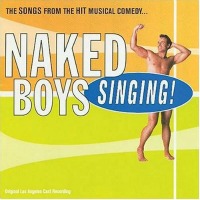 (3 / 5) Obviously, the cast album can’t capture the raison d’être of this popular revue. Yet it does help make conceiver-director Robert Schrock’s case, as described in his notes for the recording, that Naked Boys Singing! is not a salacious show but, rather, a simple celebration of nudity. When you hear these charming songs (by various writers) about nakedness in settings ranging from a bris to a locker room, you’ll understand why many people who have seen the show feel it’s more cute than crude. Still, with sometimes explicit mentions of male privates — most hilariously in “Members Only” and “Perky Little Porn Star” — even the recording is for mature audiences only. Other comic highlights include “The Naked Maid,” “Nothin’ but the Radio On,” and a tribute to one-time movie sex symbol Robert Mitchum. Naked Boys also has its more serious moments, notably the lovely ballad “Window to Window,” about two men looking at each other from separate apartments and contemplating meeting. — Brooke Pierce