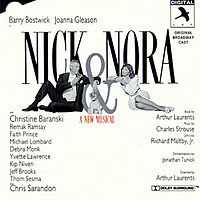 (2 / 5) As conceived by librettist Arthur Laurents, the ambitious Nick and Nora wanted to be a gripping murder mystery, an X-ray of Hollywood hypocrisies, a feminist investigation of marriage, and also a witty Broadway musical. That this overloaded ship capsized shortly after opening night is no surprise, but what remains is the work of gifted people; and the score, by composer Charles Strouse and lyricist Richard Maltby, Jr., improves with repeated listening. As the title characters, taken from Dashiell Hammett’s novel and movie series The Thin Man, Barry Bostwick and Joanna Gleason probe the murder of a blackmailing bookkeeper, played by Faith Prince in a performance of creepy comic intensity. The list of suspects includes a director of the Erich von Stroheim variety (Remak Ramsay), a Katharine Hepburn-ish actress (Christine Baranski), and a Boston matron based on Rose Kennedy (Debra Monk). There’s also a corrupt union president played by Chris Sarandon. The songs were woven in and out of the dialogue in a way that would have been difficult to reproduce on a recording, so the score isn’t really heard as it was in the show. It’s an odd blend of imitation movie music (“Is There Anything Better than Dancing” and “Let’s Go Home”) with sophisticated-but-sour items like “Men” (the victim’s bitter tirade against the stronger sex), “People Get Hurt” (sung by Monk as the tough matron), and “Busy Night at Lorraine’s” (in which Nick and Nora run through competing versions of the murder). The blue-chip cast cannot be faulted, and Maltby’s lyrics are filled with cleverness and clues. Jonathan Tunick’s orchestrations give Strouse’s music a citrus bite, but the show’s clashing agendas result in serious tonal problems. Frustratingly, the notes in the CD booklet don’t reveal the solution to the mystery, so you’ll have to wait for a (most unlikely) revival to find out who did it and why. — David Barbour