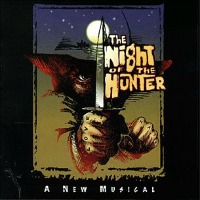 (2 / 5) Composer Claibe Richardson, best known for his remarkable score for The Grass Harp, worked unsuccessfully on a musical version of Sweeney Todd for several years before Stephen Sondheim produced his masterwork. Richardson then found similarly dark source material in The Night of the Hunter, a 1955 cult film that starred Robert Mitchum as an ex-con “Preacher” with “L-O-V-E” tattooed on the knuckles of one hand and “H-A-T-E” tattooed on the other. This genuinely evil protagonist is a casual murderer who spends most of the story trying to kill two young children for their money. So the question is, “Can you draw sweet water from a foul well?” The score is filled with gorgeous, emotional numbers such as “Lookin’ Ahead,” “The River Jesus,” “One More Harvest,” and especially “Trading Secrets.” Yet some of the material seems shapeless, and Stephen Cole’s lyrics take too long to make the plot points. The real problem here is the Preacher; none of the songs written for this frightening sociopath really land, except for “Trading Secrets,” which has a built-in dramatic situation. The music keeps building in volume and intensity, but it never really gets inside of the character. On the plus side, the cast of this recording is extraordinary, from George Lee Andrews’ quietly desperate performance as the children’s doomed father to Ron Raines as the Preacher and Sally Mayes as one of his victims. Marcia Lewis provides something akin to comic relief, and Dorothy Loudon makes something very special of “One More Harvest.” — David Wolf