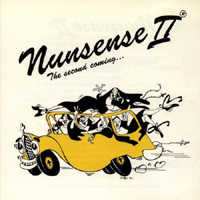 (2 / 5) Can anyone blame Iibrettist-composer-lyricist Dan Goggin for not wanting to mess with the formula that made Nunsense such a success? Of course not. Still, Nunsense II might have been more original. The score of the sequel does more than pay homage to its predecessor; again, there’s an upbeat opening chorus, a nun ballerina song, an understudy’s lament, a puppet-aided comedy number, a lengthy first-act finale dance, a gospel showstopper, and so on. Goggin even unapologetically quotes the previous show’s music in “The Biggest Still Ain’t the Best” and “Look Ma, I Made It.” The numbers that do incorporate new ideas — “We’re the Nuns to Come To” (in which the sisters consider starting a burial service), the envious “Padre Polka,” and the effervescent can-can “Yes, We Can” — are more fun than the retreads. Kathy Robinson, Mary Gillis, and Lyn Vaux are acceptable replacements for the originators of their roles, but returning cast members Christine Johnson and Semina De Laurentis shine most brightly, particularly in (respectively) the joyous “I Am Here to Stay” and the emotional “No One Cared Like You.” Michael Rice’s musical direction is, once again, just right. All in all, Nunsense II works best if you don’t know the original. — Matthew Murray