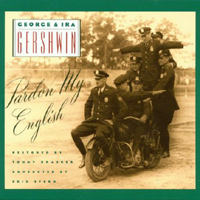 (4 / 5) Pardon My English,  the 1933 musical that had the shortest Broadway run of any Gershwin show, makes for a most entertaining recording. The wonderful songs are mostly unfamiliar, but Eric Stern’s conducting is lively, and the original orchestrations sound strong rather than distractingly antique. The show has a troubled history: After a hellish gestation during which the original cast members quickly departed, Pardon My English was totally rewritten by Herbert Fields and Morrie Ryskind. Then Ryskind decamped, as well. Jack MacGowan, who had scripted Girl Crazy, came in and did last-minute doctoring just before the New York opening. Of course, George and Ira Gershwin had to do considerable jiggering of the score to suit the revised plot and characters. Although the story makes little sense, the songs are delightful. “Isn’t It a Pity?” is certainly the best of them, but obscure numbers such as “Where You Go, I Go” and “I’ve Got to Be There” are as enjoyable as some of the Gershwin gems you’ve been listening to and loving all your life. There are also a few “lyric fun” songs: “Freud and Jung and Adler,” “He’s Oversexed,” and “My Cousin in Milwaukee.” The first-rate cast of this recording is headed by John Cullum, William Katt, Arnetia Walker, and Michelle Nicastro. — David Wolf