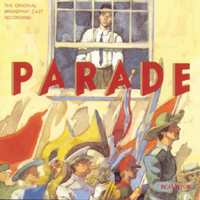 (4 / 5) Composer-lyricist Jason Robert Brown earned a Tony Award for his work on Parade, his first Broadway score. Although this dark musical about accused murderer Leo Frank had only a limited run at the Vivian Beaumont Theater, it yielded an excellent cast recording. Alfred Uhry’s book for the musical is distancing, and so was Harold Prince’s direction of the show, but Brown’s score is excellent. Note the evocative Southern flavor that’s so vital to the story’s Georgia setting in the beautiful opening anthem, “The Old Red Hills of Home,” and the heavy blues strains in the chain-gang song “Feel the Rain Fall.” Also exciting: the eight-song trial sequence, which runs the gamut from sentimental to comic to soulful, and the show’s dynamic second-act duets, “This Is Not Over Yet” and “All the Wasted Time.” These are put across with gusto by Brent Carver and Carolee Carmello, who each have strong solo moments as well (his “How Can I Call This Home?” and her “Do It Alone”) but who truly soar when singing together. The rest of the cast is equally top-notch: Rufus Bonds, Jr., Don Chastain, John Hickok, Herndon Lackey, Jessica Molaskey, Evan Pappas, Christy Carlson Romano, John Leslie Wolfe, and the ensemble all come across beautifully. If not every song on the album is a gleaming gem, it’s an impressive score overall. — Matthew Murray