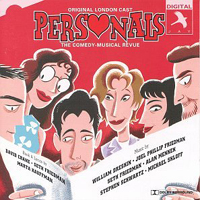 (3 / 5) Before their huge success with TV’s Friends, David Crane and Marta Kauffman wrote this amusing theater piece in collaboration with lyricist Seth Friedman and various composers. No cast album of the original 1985 Off-Broadway production was made; this is a recording of the 1998 London staging that featured David Bardsley, Martin Callaghan, Marcus Allen Cooper, Christina Fry, Ria Jones, and Summer Rognlie. As the title suggests, Personals is about people who run “personals” ads. The characters include a shy teenager who, believing that he’s the last remaining virgin, advertises for a teacher of “extra-curricular activities” and gets nearly 100 responses; a young woman who’s open to dating for the first time since her marriage broke up; and a lonely man who’s trying to concentrate on a book while hoping for the doorbell to ring. The typesetter who works on the ad page sings about the pleasures that he and his wife have found with their new partner, a bisexual dwarf: “So my wife and I have fallen for a guy who’s three foot two — well, so would you!” Despite its seemingly absurd premise, the song becomes moving at the end. In the best piece, “Moving In With Linda,” a man’s old girlfriends pop out of his suitcases and trunks; the music and lyrics for this item are by Stephen Schwartz, who also wrote the impressive opening and closing numbers. The rest of the songs are by Michael Skloff, Alan Menken, Seth Friedman, Phillip Friedman, and William Dreskin. — David Wolf