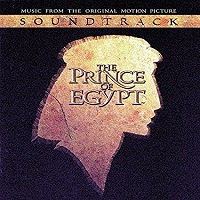 (3 / 5) Like several other animated musical classics of the screen, from Snow White to the clutch of far more recent Disney films (The Little Mermaid, Aladdin, Beauty and the Beast, Frozen, Coco, et al.), Prince of Egypt contains considerably fewer songs than would be included in a stage musical. But the songs with music and lyrics by Stephen Schwartz that are heard here, beautifully augmented by Hans Zimmer’s lush orchestral score, make for a thoroughly enjoyable listening experience. Highlights of what is basically an animated musical remake of The Ten Commandments (!!!!) include the powerful opening chorus of the Hebrew Slaves, “Deliver Us”; Moses’ plaintive song, “All I Ever Wanted,” sung by Amick Byram, with the “Queen’s reprise” delivered equally persuasively by Linda Dee Shayne; a weird, comic-villain number, “Playing with the Big Boys Now,” performed by Steve Martin and Martin Short as two of the Pharoah’s henchmen; the inspirational ballad “Through Heaven’s Eyes,” which allows us to revel in the wonderful Broadway baritone of Brian Stokes Mitchell; and the lovely duet “When You Believe,” prettily sung in pseudo pop-style by Michelle Pfeiffer and Sally Dworsky, with the bonus of a full-on pop version by Mariah Carey and Whitney Houston. — Michael Portantiere 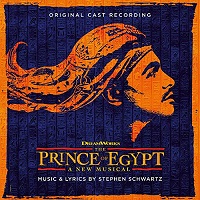 (3 / 5) Unsurprisingly, no music by Hans Zimmer is to be heard in this stage adaptation of Prince of Egypt, but Stephen Schwartz augmented the film’s song stack to create a full-fledged stage musical that made its debut at TheatreWorks Silicon Valley at the Mountain View Center for the Performing Arts in 2017, then had its international premiere in a Danish production at the Fredericia Teater in April 2018, followed by a summer run at the Royal Danish Theatre in Copenhagen and a presentation at the Tuacahn Amphitheatre in Ivins, Utah. A revised version opened at the Dominion Theatre in London’s West End on February 2020 and, after closing in March of that year due to the COVID-19 pandemic, reopened on July 1, 2021. “Playing With the Big Boys Now” was eliminated from the show score early on (probably for the best), but as noted, many new songs were added, resulting in a cast album that’s full to bursting with 23 tracks (including three reprises). “Deliver Us” makes for a thrilling opening sequence, and the other items retained from the film (“All I Ever Wanted,” “Through Heaven’s Eyes,” “When You Believe”) work equally well as stage musical numbers. Among the major new additions are songs titled “Faster,” “One Weak Link,” “Footprints on the Sand,” “Make it Right,” “Never in a Million Years,” “Always on Your Side,” and “For The Rest of My Life.” If none of these represent Schwartz’s top-shelf work, they are all worthy efforts by one of the musical theater’s greatest composer/lyricists, performed by a strong cast headed by Luke Brady (Moses), Liam Tamne (Ramses), Christine Allado (Tzipporah), Alexia Khadime (Miriam), Joe Dixon (Seti), Debbie Kurup (Queen Tuya), Gary Wilmot (Jethro), Mercedesz Csampai (Yocheved), Adam Pearce (Hotep), Tanisha Spring (Nefertari), and Silas Wyatt-Barke (Aaron).  — M.P.