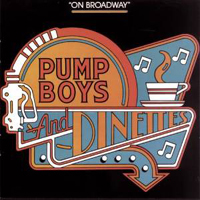 (4 / 5) An unexpected delight when it opened, this revue of countryish songs doesn’t have much in the way of a story line. The setup of a roadside stop populated by a quartet of service-station fellas and a pair of flirtatious waitresses was simply an excuse to keep on singing. Cast members Jim Wann, Mark Hardwick, John Foley, John Schimmel, Debra Monk, and Cass Morgan wrote material for the show and/or played instruments convincingly, performing with nice dollops of personality. The recording  contains 19 numbers that would still perk up any country-music play list. Three of the tracks — “Be Good or Be Gone,” “The Night Dolly Parton Was Almost Mine,” and “Sisters” — were produced by Billy Sherrill, the rest by Mike Berniker. Don’t try looking for conflict or character development in these songs; just kick back in your boots, and listen up. — David Finkle