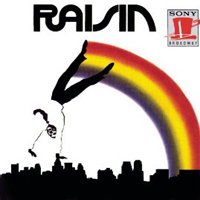 (3 / 5) Despite its healthy Broadway run and its Tony Award for Best Musical, Raisin is almost completely forgotten. Fortunately, the Robert Nemiroff-Charlotte Zaltzberg adaptation of Lorraine Hansberry’s A Raisin in the Sun, with a score by composer Judd Woldin and lyricist Robert Brittan, yielded a wonderful cast album. Stunning vocals tell the story: The matriarch (Virginia Capers) of the ghetto-bound, black Younger family wants to use her late husband’s insurance money to buy a nice house that’s up for sale in a white neighborhood, but her son Walter (Joe Morton) and daughter-in-law Ruth (Ernestine Jackson) have different ideas about how to use the money. There’s also fine work from Debbie Allen as Walter’s striving sister and Ralph Carter as Walter and Ruth’s son. The score is alternately soulful, driving, and tender. The pulsating prologue sets the tone, followed by “Man Say,” Morton’s explanation of the differences between men and women. Jackson shines in “Whose Little Angry Men” and “Sweet Time.” Other highlights are the lovely “Sidewalk Tree,” the biting “Not Anymore,” and the rousing gospel tune “He Come Down This Morning.” Capers’ 11-o’clock number, “Measure the Valleys,” is one of the most powerful theater songs of the period. — David Barbour