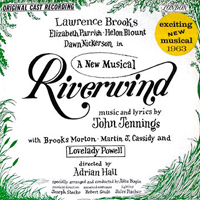 (3 / 5) After a brief instrumental prelude of the title song, the sound of crickets is heard, a soft female voice sings hauntingly in the distance, and the juvenile begins a sweet lament about the girl he loves (“I Cannot Tell Her So”). This is how Riverwind gets going, and it gradually becomes an almost-Chekhovian piece as it explores the relationships of two couples visiting Riverwind, a bucolic getaway along the Wabash River. The older couple (played by Elizabeth Parrish and Lawrence Brooks) is returning to the site of their honeymoon; the younger couple (Brooks Morton and Lovelady Powell) are not married. Also on hand are the woman (Helon Blount) who runs Riverwind, her daughter (Dawn Nickerson), and a boy (Martin Cassidy) who works there. The songs by composer-lyricist John Jennings are highly entertaining, performed by seven wonderful singing actors. Blount practically steals the recording with two contrasting duets: “Sew the Buttons On,” wherein she gives some homespun advice to her daughter, and “A Woman Must’ Never Grow Old,” a drunken, barrel-house-style number with Parrish. Nickerson is all youthful exuberance in “I Want a Surprise” and Parrish is all delicate wistfulness as she lends her sure soprano to the title song. Morton and Powell get two excellent comedy duets, “American Family Plan” and “Almost, But Not Quite.” There is also a sophisticated quartet called “Wishing Song.” The recording is well produced, with just enough dialogue to give the songs a dramatic context. (Ed. Note: Riverwind opened in December 1962, but the cast album was released in 1963.) — Jeffrey Dunn