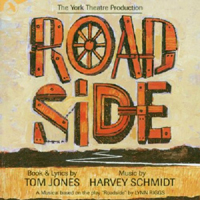 (2 / 5) Tom Jones and Harvey Schmidt first began work on a musical adaptation of Lynn Riggs’ 1930 play Roadside in the mid-1950s but didn’t complete it until almost a half-century later. In many ways, the musical still felt unfinished in its 2001 York Theatre production. (The cast album was made in early 2002.) It tells the meandering, bland story of a woman caught between a tough bad guy and a meek good guy, and the score is full of harmless but mostly unmemorable numbers. The recording nicely preserves the simple, country-tinged songs, but the score isn’t on a par with that of the established Jones-Schmidt hits. The title song is attractive, as is the rustic ballad “The Way It Should Be.” The bawdy “Personality Plus,” energetically delivered by James Hindman, is a real highlight. Drab performances from just about everyone else, including leads Julie Johnson and Jonathan Beck Reed, don’t help, but songs like “Here Am I,” “Smellamagoody Perfume,” and “Another Drunken Cowboy” probably wouldn’t sound great even if performed by Broadway’s best.  — Matthew Murray