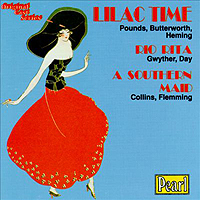 (3 / 5) One of the quintessential musicals of the 1920s, Rio Rita was also a bit of an oddity, poised as it was on the brink between musical comedy and operetta. It has a typically lush and improbable plot (romance and intrigue on the Texas/Mexico border), a lot of comic relief, and an excellent score by Harry Tierney with lyrics by Joseph McCarthy. Florenz Ziegfeld thought enough of the show to use it to inaugurate his colossal Ziegfeld Theater, where it opened in 1927 and ran for a year, then inspired two movies — a musical and an Abbott and Costello comedy. Since then, it has been little in evidence; with its haciendas and banditos, Rio Rita probably isn’t a candidate for a politically corrected revival. This album of six selections from the score features members of the original London cast. (“You’re Always in My Arms,” a song that Tierney wrote for the first movie version, is interpolated here.) Edith Day is fine as Rita. Geoffrey Gwyther, as her romantic Texas Ranger, is virile of voice but so implacably British in manner that’s it’s a hoot to hear him singing of his patrols along the Rio Grande. The nationality of the chorus members is just as obvious, but this doesn’t detract from their enthusiasm, or from the enjoyment these recordings still give a listener so many years after they were made. (Note: Selections from Lilac Time and A Southern Maid are also included on Pearl’s CD.) — Richard Barrios