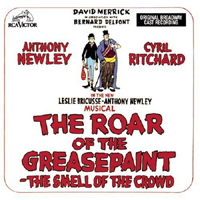 (3 / 5) Is that a car with a bad muffler, or a lame rhinoceros rousing itself out of the mud? No, it’s Anthony Newley, wallowing in self-pity and vibrato as he belt-bleats, “WHOOO can I tuuhhn to ifYOUUU tuuhhnAH-WHYYYY!!I” — one of several fine songs in this unprofitable but tuneful follow-up to Stop the World, I Want to Get Off. Like that 1961 hit, Roar was a self-consciously “new-style” musical that starred Newley and featured a Newley-Leslie Bricusse score. There’s little spine to the book except for Cyril Ritchard as Sir constantly getting the better of Newley’s Cocky, with a children’s chorus spelling them from time to time. But the score is strong; it includes not only “Who Can I Turn To?” but also “On a Wonderful Day Like Today,” “Look at That Face,” “My First Love Song,” and other goodies. Ritchard’s dry prissiness works well here, and Philip J. Lang’s orchestrations are super-bright. (Love those dissonant trumpets, a half-tone apart, in “Joker.”) Gilbert Price as “The Negro” (this was a well-meaning show but a naïvely symbolic one) offers a spine-tingling, nearly a cappella rendition of “Feeling Good,” and the kids are cute in “The Beautiful Land” and “That’s What It Is to Be Young.” They help compensate for the moments when Newley’s vibrato careens off the highway.  — Marc Miller