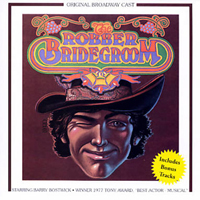 (4 / 5) Let’s face it, country music is not where Broadway shines. But this show is a happy exception to the rule. Composer Robert Waldman and lyricist-librettist Alfred Uhry came up with a fiddle-filled score that beautifully enhances Eudora Welty’s story of an innocent young lass who falls in love with the handsome, brooding anti-hero. Waldman delivers music written in various country styles, including folk-like ballads, bluegrass, square dances, toe-tappers, and comedy numbers, yet there is a theatricality to the songs that makes you glad this is a Broadway musical. Of course, it also helps greatly to have future Oscar, Tony and Pulitzer Prize-winner Alfred Uhry on hand to craft lyrics that beautifully define the characters. Many musical theater fans will view as a disappointment this recording with the 1976-77 Broadway cast — Barry Bostwick, Rhonda Coullet, Barbara Lang, Lawrence John Moss, Ernie Sabella, Stephen Vinovich, Dennis Warning — because it does not feature Patti LuPone, who played the heroine in the original 1975 cast. Another thing: Don’t you hate it when a CD lumps two songs together in one track, one of which you love far more than the other? If you want to put the track on “Repeat,” there’s no getting around having to hear the song you wish would go away. And that brings us (eventually) to “Two Heads Are Better Than One” on this recording. To get to this goodie,  we must wade through 35 seconds of a just-okay song called “Suddenly the Day Looks Sunny” and then the bane of cast album guru Goddard Lieberson’s existence: introductory dialogue that you won’t want to hear more than once, if even once. Granted, there’s only 10 seconds of it, but every little bit hurts. After all that, we finally arrive at the delicious “Two Heads….,” which felicitously tells of a couple of brothers, one of whom is the brains of the operation and the other the brawn. This unfortunate tracking decision is a flaw in a generally swell album. — Peter Filichia 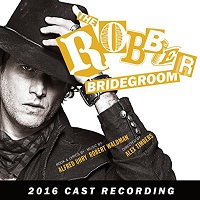 (4 / 5)  Here, “Two Heads Are Better Than One” happily gets an all-by-its-lonesome track, and for those of us who adore the song, that’s enough reason to acquire this recording. But it’s hardly the only motivation. The album clearly displays why the 2016 Off-Broadway production came home with three Lucille Lortel Awards, including Outstanding Revival. Other winners? Outstanding Lead Musical Actor  Steven Pasquale as Jamie, the title character, who comes across as a lovable rogue in all of his half-dozen songs. Outstanding Featured Musical Actress Leslie Kritzer is a delight as a stepmother so evil that she makes Cinderella’s seem like Maria von Trapp. Alas, the recording doesn’t give you the opportunity see Kritzer making her pretty face look utterly hideous for the role, but she’ll tell you all about face values in “The Pricklepear Bloom.” Ahna O’Reilly should have taken home some prizes of her own for her portrayal of Rosamund, who gets involved with bad boy Jamie (as some lovely ladies do, instead of seeking kind gentlemen). O’Reilly’s  fine rendition of “Sleepy Man” will keep even the most sleep-deprived wide-awake. This cast album sounds less “Broadway” than the previous one; not that the 1976 version will ever be confused with the work of Rodgers and either Hart or Hammerstein, but this one is rougher around the edges, with voices that growl more. In addition to music director Justin Levine, we can thank director Alex Timbers for the new interpretation, and for co-producing (with Kurt Deutsch) a Robber Bridegroom album that gives “Two Heads Are Better Than One” its full due. — P.F.