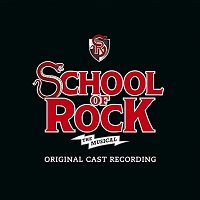 (3 / 5) Andrew Lloyd Webber found his greatest commercial success in the era of the British pop-opera blockbusters, so it’s easy to forget  that he first made his mark in the musical theater world by using pop/rock music to groundbreaking effect in his scores for Jesus Christ Superstar and Evita. Which leads us to School of Rock, the first new Webber score to come to Broadway in a decade. Based on the 2003 film of the same title, starring Jack Black, the show tells of Dewey (Alex Brightman), a directionless man-child and rock and roll devotee who forms his own rock band with the children of a prestigious prep school where he has recently been working as a substitute teacher under false pretenses. While the score isn’t of the same quality as Evita or Superstar, partly due to Glenn Slater’s no more than serviceable lyrics, it’s certainly the most inventive and fun Webber’s been in years. As Dewey, Brightman has the same likeable charm Black offered on screen, as well as an exciting rock voice that’s up to the difficult demands of the role (a hallmark of Webber’s writing). As the school’s stern headmistress, Sierra Boggess is less successful, proving effective in classical moments such as her short snippet of Mozart’s “Queen of the Night” aria, but unable to negotiate her polished soprano around the contemporary elements of her breakout ballad, “Where Did the Rock Go.” The score is not a complete triumph for Webber; on the one hand,  when Dewey and his students finally come together to create their band’s sound in the numbers “You’re in the Band” and “Stick it to the Man,” you can practically hear Webber’s giddiness, but in “When I Climb to the Top of Mount Rock” and “Children of Rock,” the composer goes overboard from the start, and the songs never have a chance to build. Note: School of Rock was recorded before the show began Broadway performances, and certain aspects of the cast album do not reflect the score as it is now. Most notably, “Give Up Your Dreams,” an unfunny anthem (though well performed by Mamie Parris), was cut in previews but is included here, along with a few bonus tracks at the end.  — Matt Koplik