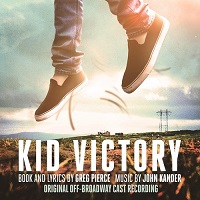 (4 / 5) Kid Victory premiered at the Signature Theatre in Arlington, VA in 2015, and played a limited run Off Broadway at the Vineyard in 2017.  One would be hard-pressed to find more beautiful, haunting melodies than those created by John Kander for this show, and just as hard pressed to find a darker, more disturbing plot (book and lyrics by Greg Pierce):  Seventeen-year-old Luke (the wonderful Brandon Flynn) has just returned to his family after a year in the captivity of a man who had abducted him. This is a score of stark contrasts, beginning with the “Opening/Lord, Carry Me Home,” in which the prayers sung at the boy’s parents’ church shift into hostile voices in Luke’s imagination. Meanwhile, his mother (Kander veteran Karen Ziemba) burbles how their friends will be ecstatic to see Luke again. The contrasts continue in “The Marble,” as a well-meaning amateur therapist (Ann Arvia) tries to treat Luke but conjures up memories of his kidnapper, Michael (Jeffry Denman). Luke’s existence has been bifurcated into before his ordeal and after, as his mom poignantly notes in “There Was a Boy,” so Kander and Pierce made some bold choices reflecting that. Several songs are punctuated with dialogue, while others are startlingly short. Characters appear for single numbers — among them the sheriff, Luke’s ex-girlfriend, and Andrew, a gay teen whose show biz-styled “What’s the Point?” indicates he’s unlike others in this small town. The quirky shopkeeper Emily (Dee Roscioli) has her own troubled past, yet her “People Like Us” resonates with Luke. Throughout the score, Luke does not sing a note, a device meant to convey his trauma; there is no escape from his memories of Michael, alternately charming and chilling. Denman’s performance is masterful and terrifying, from the way Michael angrily snaps while retelling a Viking saga (“Vinland”) to his insidious plotting in the seemingly innocent “Regatta 500” to the tragic “You, If Anyone” — a heartbreaking melody paired with Michael’s idealistic hopes for Luke’s future, beautiful until one realizes the context. A pat ending would have Luke singing in recovery, but this score is too honest for that. Instead, Luke’s dad (Daniel Jenkins), a character on the periphery until now, reaches out to his son in “Where We Are,” another brief, yet illuminating number. Luke isn’t whole yet, but his Dad is trying to connect with him. And that’s a start. — Laura Frankos