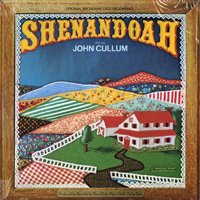 (3 / 5) Based on the film of the same name, this musical tells the story of Charlie Anderson, a widowed Virginian who tries in vain to keep his family uninvolved in the Civil War. Librettist James Lee Barrett adapted his screenplay in collaboration with Philip Rose and Peter Udell; the songs are by lyricist Udell and composer Gary Geld. Shenandoah enjoyed a healthy run, due in part to the superb, Tony Award-winning performance of John Cullum as Anderson. The homey, country-tinged score is unfailingly tuneful; a standout is the joyous “Freedom,” sung by Donna Theodore and Chip Ford. “Next to Lovin’ I Like Fightin’,” a testosterone-infused number for the six Anderson sons, is rousing. (Sample lyric: “Next to poetry and prose, I like punchin’ me a nose!”) “Violets and Silverbells,” “The Only Home I Know,” and a few other songs are a little treacly, but Cullum’s numbers carry the show: He’s bracingly angry in “I’ve Heard It All Before,” tender in “The Pickers Are Cornin” and “Papa’s Gonna Make It Alright,” and commanding in his two “Meditations.” — Michael Portantiere