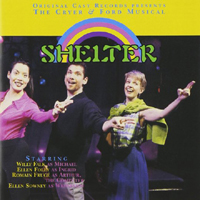 (3 / 5) Seven years after the 1973 Broadway failure of Shelter, librettist-lyricist Gretchen Cryer and composer Nancy Ford rewrote the show, combining it with the first act of their earlier musical The Last Sweet Days of Isaac. In 1997, a newly titled revision, The Last Sweet Days, was presented by the York Theatre Company; that production was recorded under the title Shelter, and that’s the cast album under review here. (Got it?) But rather than solving the problems of their two unsuccessful musicals, all the team did was create a third show that substitutes a certain verbosity for dramatic action. In the first act of Shelter, Isaac is more than a little crazy. In the second act, the character (who has changed his name to Michael) monstrously mistreats his wife, his girlfriend, and a woman named Ingrid, whom he had known earlier and has just met again and bedded. This plot twist adds no resonance or meaning to the piece. In sum, Shelter is a tedious, sedentary soap opera about “relationships,” albeit one filled with imaginative touches and a bunch of good songs, nicely sung here by Willy Falk, Ellen Foley, Ellen Sowney, and Romain Fruge as the voice of Arthur, a singing computer. — David Wolf