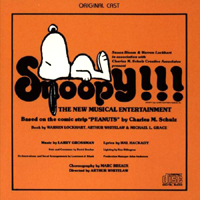 (2 / 5) If you admire You’re a Good Man, Charlie Brown as much as I do, you too may have trouble warming to its sequel, Snoopy!!! While the former captures Charles Schulz’s comic-strip characters well in all of their endearing idiosyncracies and obsessions, the problem with Snoopy!!! (aside from those exclamation points) is that its songs are generic. The most appealing number, “Poor Sweet Baby,” inspired by an actual Peanuts punch line, sounds like a pop song; “Don’t Be Anything Less Than Everything You Can Be” and “Just One Person” could have come from any children’s musical; and Snoopy’s 11-o’clock number, “The Big Bow Wow,” is empty showbiz. It doesn’t help that the bland Peppermint Patty is emphasized here as a substitute for the more dynamic character of Lucy. Lyricist Hal Hackady does connect with the comic strip successfully in “Clouds,” where the kids talk about the shapes they see in the sky — one sees the ceiling of the Sistine Chapel, one sees the Fall of Rome, but Charlie Brown is forced to admit that what he sees is “a horsey and a ducky.” Larry Grossman’s music is melodic and filled with humor, and the fine cast includes Don Potter, James Gleason, Pamela Myers, Jimmy Dodge, Carla Manning, Roxann Pyle, and Alfred Mazza. — David Wolf 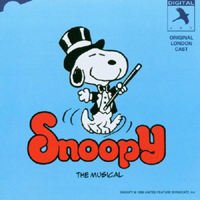 (3 / 5) Five songs not heard on the San Francisco recording are welcome additions here, and this version of Snoopy (those silly exclamation points having been removed for the London production) relates more specifically to the characters. “Snoopy’s Song” and “Mother’s Day” especially lift the Grossman-Hackady score, and although “Hurry Up, Face,” “Dime a Dozen,” and “When Do the Good Things Start?” aren’t as well targeted, they are so tuneful that we can forget about dramaturgy and simply enjoy the listening experience. Other improvements: Stuart Pedlar’s musical direction; a small instrumental combo, versus only two pianos on the first album; a fine overture; and, singing with far more spirit than their American counterparts, a terrific British cast consisting of Terry Kempner (Snoopy), Robert Locke (Charlie Brown), Nicky Croydon (Peppermint Patty), Susie Blake (Sally Brown), Mark Hadfield (Linus), Zoe Bright (Lucy), and Anthony Best (Woodstock). — D.W.