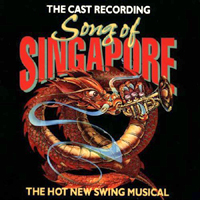 (2 / 5) A tongue-in-cheek pastiche of 1940s pop culture, Song of Singapore had a substantial Off-Broadway run at a nightclub venue. It was whipped up by a quartet of composer-performers: Erik Frandsen, Michael Garin, Robert Hipkens, and Paula Lockheart, who wrote the songs and collaborated on the book with Allan Katz. Set in a Singapore gin mill, the plot deals with a jewel heist, a murder, an amnesiac female flier who’s also a lounge singer, and a band called the Malayan Melody Makers. It includes elements of works by W. Somerset Maugham, Raymond Chandler, and numerous black-and-white movies. The songs work nicely within the context of the daffy libretto and benefit from first-rate execution by a five-person combo; further instrumentation is provided by the versatile cast. With tropical drinks flowing and table-seated spectators surrounded by dramatic action, Song of Singapore was a great night out, but no one’s idea of a landmark in musical theater. Still, the swinging score received Drama Desk and Outer Critics Circle citations and was preserved via this recording, which features the torchy Jacquey Maltby and three of the show’s songwriters. (The fourth, Lockheart, served as the production’s “jazzaturg.”) Donna Murphy, who was in the original cast, is not heard here. Director A. J. Antoon died during the show’s run, so Song of Singapore is fondly remembered by theater folk as his swan song. — Charles Wright