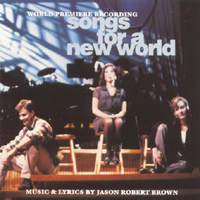 (3 / 5) Songs for a New World documents composer-lyricist Jason Robert Brown’s superb musicianship and his knack for connecting with younger audiences who appreciate contemporary musical theater styles. Even though Brown’s occasional tendency toward self-indulgence in his work is apparent here, this recording of his inaugural revue makes it clear why he burst onto the New York theater scene in such a big way. As a creator of story songs, he’s a master, and some of his most brilliant work is heard on this album. Highlights include “Stars and the Moon” and the searingly funny Brecht/Weill parody “Surabaya Santa,” both expertly sung by Jessica Molaskey; ”I’m Not Afraid of Anything,” movingly delivered by Andrea Burns; and the modern love duet “I’d Give It All for You,” impressively performed by Burns and Brooks Ashmanskas. Ty Taylor, the fourth performer heard here, is somewhat lacking in spark. The singers, the band (led by Brown), and the orchestrations (by Brown and Doug Besterman) generally keep the songs sharp, but some of them have a similar, inflated sound that grows wearisome in large doses — notably, “The New World,” ”American Flag, 1775,” and “Hear My Song” (in which Brown sings). So, worthy as this recording is, it’s most enjoyable when sampled a little at a time. — Matthew Murray