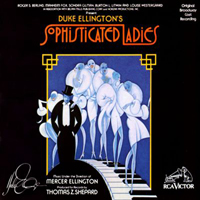 (3 / 5) Duke Ellington classics were well served in the revue Sophisticated Ladies, which received 10 Tony Award nominations and ran on Broadway for nearly two years. Without the show’s visual elements, the recording sounds more like a greatest-hits anthology featuring the Duke Ellington Orchestra and fine singers than a traditional cast album, but Ellington’s genius as a composer is amply evident in the staggering array of wonderful songs to be found here: “It Don’t Mean a Thing,” “Don’t Get Around Much Anymore,” “Take the A Train,” “I Let a Song Go Out of My Heart,” “Satin Doll,” “Mood Indigo,” “I Got It Bad and That Ain’t Good,” “I’m Beginning to See the Light” — and, of course, “Sophisticated Lady.” Cast members Gregory Hines, Judith Jamison, Phyllis Hyman, P.J. Benjamin, Gregg Burge, and Hinton Battle are all top-notch, as is the musical direction by Mercer Ellington. — Morgan Sills