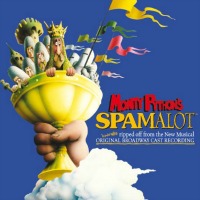 (2 / 5) This show, based on the classic film comedy Monty Python and the Holy Grail, attempts to spoof the formula of musical theatre while still adhering to it. Written by Monty Python founder Eric Idle and frequent collaborator John du Prez, Spamalot sticks to what the audience remembers from the beloved movie and embellishes, rather than expands, the material for the stage. The songs were created by musicalizing famous jokes from the film (“Run Away,” “He Is Not Dead Yet”) or by breaking the fourth wall, stopping the action to turn a one-liner into a full-blown production number (for example, “You Won’t Succeed on Broadway”). Though some of du Prez’s tunes are hummable, and Idle’s lyrics occasionally contain the daffy Monty Python sensibility, their work doesn’t match the ingenuity of the film. What keeps the recording afloat is a dynamic cast of comic heavyweights including Tim Curry, David Hyde Pierce, Hank Azaria, and Christian Borle, each playing a variety of different roles that showcase their considerable talents. But it’s Sara Ramirez, a Tony winner for her performance, who walks away with the album. As the Lady of the Lake, the one role added for the stage show,  Ramirez matches her co-stars’ comedic instincts and bests all of them with her explosive vocal versatility. While her two big numbers, “Find Your Grail” and “Diva’s Lament,” are not particularly well written, Ramirez spins them both into showstoppers. Spamalot won the 2005 Tony Award for Best Musical (yet no awards for the writers) and played for nearly three years — proving that, although satire is what closes on Saturday night (as per George S. Kaufman), a meta-parody can run a lot longer. — Matt Koplik