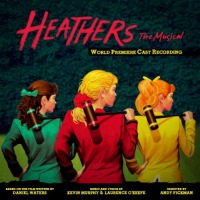 (2 / 5) Based on the ’80s cult film of the same title, Heathers is a musical that’s sometimes fun and frothy, though not particularly strong. Writers Laurence O’Keefe (Bat Boy, Legally Blonde) and Kevin Murphy (Reefer Madness) chose a broader, more cartoonish approach to the story than Kevin Waters’ acerbic, razor-sharp screenplay about two teenagers who go to drastic lengths to take down their high school’s hierarchy. While this treatment provides catchy music and a platform for the young, talented cast to display their vocal skills, it removes the bite that made the black-comedy movie so special. The light tone of songs such as “Candy Store” and “Big Fun” demonstrates that the show doesn’t intend to dig deep very often, and though some of the lyrics attempt to go for the film’s humorous shock value, they don’t ring as true as the screenplay’s now-classic dialogue. Only in the quieter moments, the ballads “Seventeen” and “Life Boat,” does the musical truly connect to the movie’s dark heart. As Veronica, originally played by Winona Ryder in the film, Barrett Wilbert Weed provides the most fully formed performance on the album; her dry line delivery and rock-tinged vocals are smart, specific, and thrilling. The orchestrations, by Ben Green and O’Keefe, capture the essence of the ’80s, even if the score mostly doesn’t. Those unfamiliar with the film will likely find this recording fun and entertaining, but hardcore Heathers fans may be disappointed that the chewing tobacco has been replaced by bubble gum. — Matt Koplik