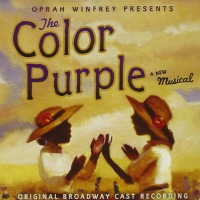 (3 / 5) Based on the Pulitzer Prize winning novel by Alice Walker, The Color Purple is a work with a lot of heart that was sadly compromised in its original Broadway production by the attempt to present it as a grand, epic musical. Though all of the songwriters are well established in the pop and R&B world, this was the first musical theater score by Brenda Russell, Allee Willis, and Stephen Bray. For the most part, their efforts are worthy. The lyrics are smart and clean, but occasionally heavy handed when leaning towards the poetic. The music, however, is consistently strong, and provides various flavors of jazz, gospel, and soul. LaChanze was given the daunting task of playing Celie, a poor woman who goes through a series of devastating life events, starting the musical at the age of 14 and ending well into her 50s. Acting-wise, the star is up for the task; she wears her heart on her sleeve, and has done the work to specify for the listener what age Celie is at any given moment. However, LaChanze is not always equal to the vocal demands of the score; she’s at her best in the quieter moments (“Our Prayer”), but her two biggest numbers (“What About Love” and “I’m Here”) don’t pack the wallop that they should, because she doesn’t sound completely comfortable from a vocal standpoint. The rest of the cast — including Felicia P. Fields, Elisabeth Withers-Mendes, Renée Elise Goldsberry, and Brandon Victor Dixon — are all vocally gifted, but they perform rather broadly. Too often in this recording, characters come across as caricatures of their literary counterparts, undermining their contribution to Walker’s powerful story. Also, in a rare misstep for Jonathan Tunick, the orchestrations are often busy, seeming to have taken too big a cue from Quincy Jones’s sweeping compositions for the film. This is not a bad score or even a bad recording, but when it’s over,  you may be smiling with appreciation rather than wiping away a tear. — Matt Koplik 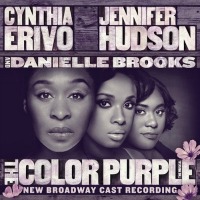 (5 / 5) Well, this is different. In bringing The Color Purple back to Broadway in a stripped down, bare-essentials production, director John Doyle — a master of simplicity — shed a whole new light on the musical and exposed all of its hidden qualities. In terms of the actual material, there’s not much difference between this revival and what was presented 10 years previously; but the approach is vastly different, and that’s why the production and the recording are a revelation. The cast — including TV star Danielle Brooks and Oscar winner Jennifer Hudson, both making their Broadway debuts — finds the humanity that make these characters resonate so deeply. Their powerful acting is reflected in their singing voices, as they attack the score with a ferocity rarely heard on Broadway. While everyone in the cast is stellar, British newcomer Cynthia Erivo is the major find here. Erivo’s Celie may experience brutality and devastation, but she is never a victim. She has strength, humor, and grit; her unstoppable voice can whisper with hurt or soar in triumph, making the 11 o’clock number “I’m Here” the tour de force it was meant to be. Special attention should also be given to the orchestrations of Joseph Joubert, who has removed the fussiness of Jonathan Tunick’s originals and instead has made the orchestra function as a support system (albeit one with great color and versatility), so that the characters are truly front and center. It’s rare for a revival cast recording to be preferable to the original, especially when the revival is significantly smaller in size. But sometimes, with a dynamic cast, a smart director, and a gifted orchestrator, miracles happen. — M.K