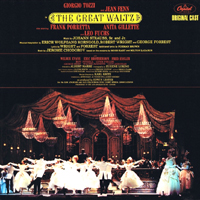 (4 / 5) Edwin Lester of the Civic Light Opera Company of Los Angeles and San Francisco was known for bringing Broadway’s first national tours to the West Coast, and for mounting revivals with as many original Broadway cast members as possible. He was also famous for creating and producing such successful “modern” operettas as Song of Norway and Kismet. This show began in Vienna in 1930 as an operetta (Walzer aus Wien) based on the lives and music of Johann Strauss Sr. and Jr.  As The Great Waltz, it traveled abroad successfully, then opened on Broadway in a new version in 1934. The credits on this recording reveal the complicated history of the show: music by the two Strausses; musical adaptation by Erich Wolfgang Korngold, Robert Wright, and George Forrest; lyrics by Wright and Forrest; additional lyrics by Forman Brown; book by Jerome Chodorov, based on versions by Moss Hart (1934) and Milton Lazarus (1949). The book of the Lester version involves the father/son conflict that actually existed between Strausses père and fils. The melodies are, of course, ravishing, and the adaptations are scintillatingly orchestrated. Metropolitan Opera stars Giorgio Tozzi (as the elder Strauss) and Jean Fenn (as an opera singer who had a serious flirtation with Strauss in his youth) are wonderful in their respective introductory solos, “I’m in Love With Vienna” and “Philosophy of Life.” And when they raise their voices together in their duets “Of Men and Violins” and “The Enchanted Wood,” they are simply grand. The role of Strauss, Jr. is sung with ringing tenor tone by Frank Porretta; the character has no solos in The Great Waltz, but his duets with Fenn and with Anita Gillette in the ingénue role of Resi are thrilling. Gillette delightfully joins with Wilbur Evans (as Herr Dommayer) in the infectious “A Waltz With Wings.” There is also a fine quartet of conflict for the four principals, “No Two Ways”; a trio titled “Music,” performed with verve by Evans, Leo Fuchs, and Eric Brotherson; and the effective “Blue Danube” finale. — Jeffrey Dunn 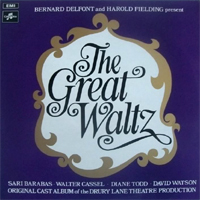 (2 / 5) Edwin Lester’s Waltz was the impetus for this production at London’s famous Theatre Royal, Drury Lane. With a few textual changes (Julius Bittner is added to the songwriting credits), it ran for 706 performances. The cast album features an overture that’s not included on the earlier recording, and there are other differences in the song stack. Sari Barabas, a genuine European operetta star, exudes Continental flair in a gorgeously sung, heavily accented “I’m in Love With Vienna,” and she could not possibly be more playful or charming in “Teeter-Totter Me” with the sturdy-voiced David Watson as Strauss, Jr.  Watson also works well with the Resi of Diane Todd, whose soprano is fluttery yet attractive. As the elder Strauss, Walter Casell displays a huge, mature baritone of great authority. The quartet for the principals gets a little wild, but the finale has Todd and Barabas doing some lovely trilling of the famous “Blue Danube.” — J.D. 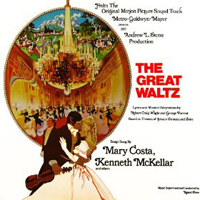 (4 / 5) Recorded in 1972, this is the soundtrack for a movie that was clearly out of step with the era in which it was created. Still,  the film is a very pleasant and artful musical version of the life of Johann Strauss II. As in the other incarnations of The Great Waltz, it uses the melodies of Strauss but adds new lyrics by  Wright and Forrest of Kismet and Song Of Norway fame. The big change here is that the lyrics are completely different from those created for the 1937 MGM movie and the 1965 Los Angeles Light Opera production. Many of the songs in the ’72 film were designed to actually narrate a biopic directed by the famously realistic Andrew Stone; others were created to utilize and exploit the singing talents of the beautiful opera star Mary Costa, best known as the voice of Sleeping Beauty in Disney’s animated film. In this way, the film manages to have a sturdy dramatic arc while adding great music and fantastic ballroom sequences choreographed by Onna White. The handsome German actor Horst Bucholz is well cast in the non-singing role of Strauss. The narrative songs here are effectively sung by tenor Kenneth McKellar, and all of the others are realistically presented as on-site performances. Wright & Forrest’s new songs have a greater maturity and sophistication than those heard in previous versions of The Great Waltz; operetta fans may well be enthralled by Costa’s renditions of “Who Are You?” and “Love Is Music.” There is also a small gem called “Say Oui, Say Ya, Say Yes” (performed by Joan Baxter), as lovely and seductive as any operetta number ever written. Sadly, this movie was made about 20 years too late, but today, it can be enjoyed for what it is: a golden example of operetta on film, and a thrilling Strauss cornucopia. The soundtrack album is a must for any operetta fan’s collection — if you can find it. The recording is now quite rare, as it was one of the last issued on the MGM records label as a vinyl LP and has never been released on CD or in any other digital format. — Gerard Alessandrini