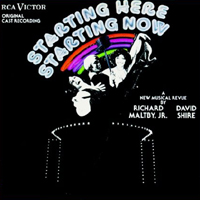 (5 / 5) Few cast recordings are as good as this one, made up of songs written by Richard Maltby, Jr. and David Shire for about 10 years’ worth of unsuccessful shows. These actable showpieces are the best ever written by the team, and this assemblage is just about the most satisfying songwriter anthology ever created. The songs are mostly sharp vignettes about New Yorkers, performed by George Lee Andrews, Loni Ackerman, and Margery Cohen, who sing wonderfully well and are utterly charming. Both women share the irresistible “I Think I May Want to Remember Today,” and Ackerman freaks out hilariously when doing the “Sunday Times Crossword Puzzle.” Cohen shines most brightly in “Song of Me,” “A Little Bit Off,” and “Autumn.” Andrews provides a strong, masculine ballast in the explosive “I Don’t Remember Christmas,” the funny “We Can Talk to Each Other,” and the touching “I Hear Bells.” Of all the 21 songs on this disc, only two are less than interesting: the title number and “What About Today?” With so much imitative musical theater writing out there, the best thing about these songs is that each of them is a fresh and original piece of work. — David Wolf 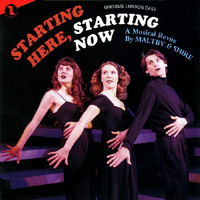 (3 / 5) If you like Maltby and Shire’s Starting Here, Starting Now as much as I do, you may want to own this  recording as well as the original Off-Broadway album, because the London cast recording contains five additional songs (plus a little encore/reprise). But note that the British performers are not as fine as their American counterparts: Michael Cantwell is a little soft, Clare Burt is a little hard, and in general, the cast lacks the effortless charm of the New York company. — D.W.