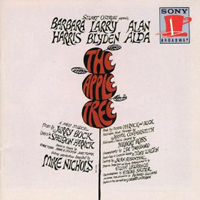 (4 / 5) What could Jerry Bock and Sheldon Harnick do to follow Fiddler on the Roof? The team answered that question with an unconventional evening of three one-act musicals, each only tangentially connected to the others. It was a concept that would show off the versatility of the performers as well as the writers. The first act, “The Diary of Adam and Eve” (adapted from a Mark Twain short story), is written in standard musical theater form; the second act, “The Lady or the Tiger” (based on a Frank R. Stockton story), has a pop-operetta writing style; and the third act, “Passionella” (based on the Jules Feiffer fantasy book), is cartoonish with a mid-’60s flavor. The Apple Tree is primarily remembered for the tour-de-force performance(s) of Barbara Harris as Eve, Barbara, and Passionella (plus Ella). Listening to this recording, one can fully understand why Harris won the Tony Award for Best Actress in a Musical over Mary Martin in I Do! I Do! and Lotte Lenya in Cabaret. After using a light, dry voice for Eve’s innocent exploration of her first feelings and singing the lullaby “Go to Sleep, Whatever You Are,” the star then rises to a sexy combination of breathlessness and belting for the almost-striptease number “I’ve Got What You Want.” She employs a wonderfully realized, barely-on-pitch sound for the determined dreamer Ella and then, finally, her voice rises to a full-throated Broadway belt for Passionella. Equally versatile, if not quite as dazzling, is Alan AIda: He morphs from a simply acted and sung Adam to a pseudo-legit Captain Sanjar and then to a rock ‘n’roll star turn before a surprise reconciliation with Ella. The recording works hard to give you enough of each segment so that you can almost follow the stories; this is aided by the presence of Larry Blyden as The Snake, The Balladeer/Lion Keeper, and The Narrator. If one laments that even more music and dialogue (especially from Act I) was not recorded, the cuts were very well thought out. Those who want a more complete document of the score should seek out the hard-to-find two-CD Takarazuka recording in Japanese.  — Jeffrey Dunn