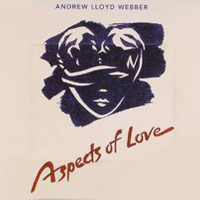 (1 / 5) Beyond being one of Andrew Lloyd Webber’s most inscrutable shows, Aspects of Love is also one of his most ridiculous — more soap opera than pop opera. Though the show’s story doesn’t diverge much from the 1955 David Garnett novella on which it’s based, you may wish it did when listening to this almost complete recording (only a few bits are missing). The endlessly foolish romantic machinations of the characters are not made more palatable by the performances of the leads, Ann Crumb and Michael Ball; they serve the score well, but they can’t do much to make their sex-obsessed characters ingratiating or sympathetic. Kevin Colson, Kathleen Rowe Martin, and Diana Morrison, who have supporting roles in this game of musical beds, come across better. With lyrics by Don Black and Charles Hart, some of the score is attractive, and musical director Michael Reed gets rich results from the orchestra, but the performers’ emoting is so overwrought that suffering through the whole thing for the sake of a few good songs is exhausting. The recording is worthwhile for “Love Changes Everything,” “Seeing Is Believing,” “The First Man You Remember,” and “Anything but Lonely,” but not for the sort of plot twists and relationship games that even daytime television might reject. — Matthew Murray