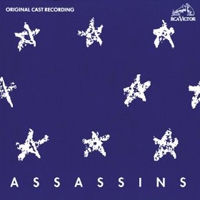 (3 / 5) There’s no doubt that Stephen Sondheim’s scores are brilliant. His lyrics are innovative; he’s the master of intellectual argument in rhyme. His best melodies, though often overshadowed by acclaim for his superb wordsmithing, are slyly inventive. Yet when the messages in his musicals are examined, they sometimes turn out to be less than the sum of the sung parts. So it is with this revue, written in collaboration with librettist John Weidman, which trots out a bevy of men and women who shot at, and in some instances killed, U.S. presidents. Sondheim and Weidman suggest that, for many unfortunate citizens, the American Dream is a nightmare. Accordingly, they set forth a series of songs — some portentous, some ironically lighthearted — to show how a sense of disenfranchisement can lead to assassination. Sondheim’s pastiche score is jaunty. Weidman’s sketches aren’t included in their entirely on this recording, with the exception of the attenuated Lee Harvey Oswald sequence, wherein John Kennedy’s murderer is visited in his Texas Book Depository hideout by the spirits of assassins past and future. (The idea is that Oswald acted as a representative of a continuing, perhaps inevitable tradition.) The cast assembled to play this group of history’s outcasts includes some of the best musical theater performers of the time, although only Victor Garber as John Wilkes Booth really gets to shine. Among the others warbling and emoting are Annie Golden, Jonathan Hadary, Patrick Cassidy, Eddie Korbich, William Parry, Terrence Mann, Lee Wilkof, and Debra Monk. — David Finkle 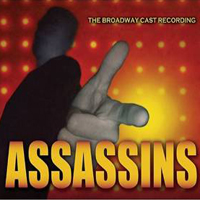 (4 / 5) It’s likely that there will never be a better production of this revue about bumping off presidents as a pastime for disgruntled citizens with irrational gripes. From start to finish, the Roundabout Theatre Company staging was a honey. Tony Awards were handed to the production, director Joe Mantello, and supporting actor Michael Cerveris, who infused the plum role of John Wilkes Booth with great fervor. The same kind of care has been given to the recording, on which Becky Ann Baker, James Barbour, Mario Cantone,  Mary Catherine Garrison, Alexander Gemignani, Neil Patrick Harris, Marc Kudisch, Jeffrey Kuhn, Denis O’Hare, and Cerveris raise their voices in disturbing song. Sondheim’s Americana pastiches, with big-and-brassy and plangent arrangements by Michael Starobin, fully demonstrate the composer-lyricist’s mastery. Much of the dialogue by John Weidman is retained on the CD, including the penultimate scene in which Lee Harvey Oswald’s predecessors come out of the shadows on the sixth floor of the Texas Book Depository and cajole their hesitant boy into firing. This is bold if not always convincing material, polished to near perfection.  — D.F.