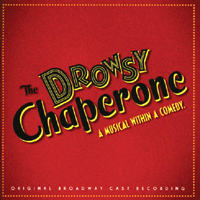 (3 / 5) This might be the first Broadway musical with commentary written into the script. Alone in his apartment, a musical theater devotee anonymously named Man in Chair plays the recording of one of his favorites, the (fictional) 1920s romp The Drowsy Chaperone. He then proceeds to provide footnotes on the stars and writers as we watch the show come to life in his apartment. On stage, it all worked beautifully and hilariously. With its dynamic original cast and inventive staging, The Drowsy Chaperone was unique in that it allowed those of us who adore musicals to see ourselves depicted on stage, while also giving us the benefit of watching a delightfully silly musical. But when taken out of the frame of the production, the score, by Lisa Lambert and Greg Morrison, proves to be merely decent. Though the songs are cute in their reminiscences of the jazzy musicals of the ’20s, they don’t move beyond hommage. The lyrics can be daffy and quirky (“Show Off”), but they never really channel the wit and sophistication of Lorenz Hart or Ira Gershwin. The music is light but fun, much helped by Larry Blank’s peppy, period appropriate orchestrations. The ensemble, clearly having a blast, revels in old school camp and bravado, and elevates the lyrics so that they seem more humorous than they are. Danny Burstein tastefully hams it up in “I Am Aldolpho,” Beth Leavel gleefully warbles Garland-style in “As We Stumble Along,” and Sutton Foster uses her star power to great effect in “Bride’s Lament.” But it’s co-librettist Bob Martin as the Man in Chair who shines brightest here. Though he has no song of his own, Martin offers anecdotes and opinions on the show within the show and its performers throughout the album. His commentary is hilarious and inventive, delivered with just the right touch of knowledge and enthusiasm. Overall, The Drowsy Chaperone is a highly enjoyable show and a fun album, but to quote the Man in Chair, “just ignore the lyrics.” — Matt Koplik