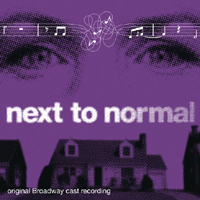 (5 / 5) If Spring Awakening marked the successful comeback of the original pop/rock musical theater score, then Next to Normal helped insure its future. Part of the reason for the show’s success is that, despite its vibrant energy, it’s a very intimate piece that wears its large heart earnestly on its sleeve. The musical tells of the inner turmoil of a suburban family due to the mental instability of the mother, Diana, who has struggled with bipolar disorder ever since a traumatizing event years earlier: Her son, Gabe, whom she still imagines to be present, died when he was a baby. Although the plot at times borders on being that of a Lifetime Movie, the smart, pulsating score, given a crisp representation on this recording, keeps Next to Normal fresh and inventive. Brian Yorkey’s lyrics are strong and well defined, often bringing a touch of humor to cut the tension in the plot (for example, “My Psychopharmacologist and I”). Tom Kitt composed a score with both fire (“You Don’t Know,” “Didn’t I See This Movie”) and sweet sadness (“I Miss the Mountains”) that he orchestrated excellently with Michael Starobin, making the work electric yet still inherently theatrical. The cast, on the whole, is excellent. Alice Ripley tears into the role of Diana with an abandon that’s fearless, thrilling and at times unnerving. Occasionally, the performer seems so at one with the part that you might fear she won’t even make it to the end of the number — but she always does. J. Robert Spencer is very moving as the silently suffering husband, Dan, and so is Jennifer Damiano as daughter Natalie. Because of the surprises in the plot, listeners who haven’t seen the show will find it especially important to read the synopsis included in the CD booklet in order to make full sense of the story and songs such as “I’m Alive” and “There’s a World,” both sung by Gabe (Aaron Tveit). But they’ll have no problem understanding the emotional potency of each song. — Matt Koplik