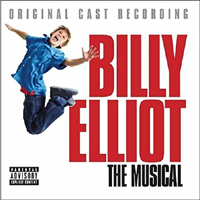 (2 / 5) Based on the film written by Lee Hall, who did double duty for the stage musical as librettist and lyricist, Billy Elliot tells of a Northern English boy who discovers a love for ballet but has to hide it from his family — including his father and brother, who are on strike with the miner’s union at the height of Thatcherism. A smash hit in London (this cast album represents that production) and on Broadway, Billy Elliot was a moving, theatrically exciting piece due in large part to its thrilling staging by director Stephen Daldry, who also directed the film, and choreographer Peter Darling. What becomes clear on the cast album, however, is the obstacle that Hall and Elton John faced with this project: How does one write a compelling musical theater score when your leading character only feels comfortable expressing himself through dance? Their answer was to create a score that more or less provided a platform for Daldry and Darling to leap from. This is not to say that the songs are bad; they do exactly what they need to do. Without the umbrella of Disney, Elton John produced some inventive melodies (e.g., “Solidarity”) that are given extra character by Martin Koch’s orchestrations, even if John occasionally tends to lean back into his specialty of pop power ballads that don’t quite fit the piece. Hall, a first time lyricist, does an admirable job of keeping the songs in the language of the working class characters. Due to the physical demands of the title role, three young actors rotated as Billy in the original London production (and on Broadway), though only one, Liam Mower, is heard on this recording. Mower does a fine job, as does the rest of the cast, most notably a crackling Hayden Gwynne as the dance teacher who guides Billy out of his shell. Listeners who haven’t seen the show may wonder why Billy Elliot was such a phenomenon; the answer is that this musical, even more than most others, truly needs to be seen to be experienced. — Matt Koplik