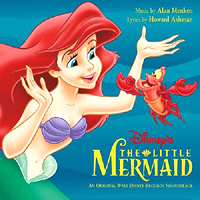 (4 / 5) After a decades-long dry spell, Disney film animation finally sprang to life again with The Little Mermaid, a musical adaptation of the children’s story by Hans Christian Andersen. Thanks in large part to its fantastic score by Little Shop of Horrors team Howard Ashman and Alan Menken, Mermaid single-handedly revived the animated musical. And in its main character, Ariel — a mermaid daughter of King Triton, desperate to join the human world — the film also birthed the first really spunky and smart Disney princess. As Disney has progressed to even more feminist stories and even stronger princesses, certain elements of The Little Mermaids’s plot have come under scrutiny, but the score has stood the test of time. Ashman and Menken created a charmingly magical work; Menken’s music ranges from funky calypso (“Under the Sea”) to sassy Broadway (“Poor Unfortunate Souls”), with Ashman bringing his usual touch of unpretentious intelligence to the lyrics. And the vocal cast of the film is still definitive. Best known to musical theater fans for her powerhouse vocals in Crazy For You and Smile, Jodi Benson here produces a purer, smoother, more intimate sound that allows “Part of Your World,” Ariel’s finely crafted “I Want” song, to deeply resonate with the listener. Pat Carroll, Samuel E. Wright, and René Auberjonois are wonderful in other roles, and the score is smartly but not overly lushly orchestrated by Thomas Pasatieri.  — Matt Koplik 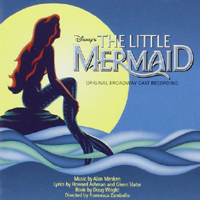 (1 / 5) Howard Ashman sadly died at the height of his career, and he never saw any of his work with Alan Menken make it to Broadway. The legacy he left behind may be relatively small, but it is substantial in quality and much beloved. When Disney brought Beauty and the Beast to the stage with financially successful results, it was only a matter of time before The Little Mermaid, the movie that started it all, would make the transition as well. Unfortunately, in this case, Disney should have left well enough alone. With Ashman gone, Glenn Slater was brought in to contribute lyrics for new songs to expand the score for a full-length stage musical, and while he managed to come up with a few good fish puns, none of his work here matches the heart and inventiveness of Ashman’s work. Menken wrote some lovely melodies for the additional songs, though some of them are recycled from incidental music heard in the movie. The cast — Sierra Boggess, Sean Palmer, Sherie Rene Scott, Tituss Burgess, Norm Lewis, et al. — is talented and, in a few cases, vocally superior to their film counterparts, but most tend to go for vocal tricks, making the majority of the score sound over-sung. While Danny Troob’s orchestrations add the necessary flashes of Broadway brass to the Menken-Ashman material without going overboard, they don’t bring as much flair to the Broadway additions. Even though this recording has more songs and offers vocal flair from some Broadway favorites, you’re better off sticking to the movie soundtrack. — M.K.