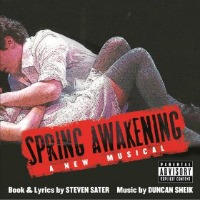 (4 / 5) Even with the success of such shows as Hair and Rent, the original pop/rock musical theater score has had a spotty history on Broadway, but it saw a major comeback in 2006 with the raw and highly charged Spring Awakening. Based on Frank Wedekind’s expressionist play, the musical tells of young teenagers in 19th century Germany on the verge of sexuality, and the adults who refuse to explain to them what their newfound urges mean. On stage, Spring Awakening crackled and even exploded with energy, but while the cast album offers a pristine presentation of the score, it lacks some of the energy and spirit that made the show itself so moving. The cast — including future stars Jonathan Groff, Lea Michele, and John Gallagher, Jr. — still provides impressive vocals, but they are less expressive than they were on stage. “My Junk,” “Totally F****d,” and a few other high-powered songs lose some of their edge, although the quieter, more intimate numbers (“Whispering, ” “The Guilty Ones”) remain haunting. In truth, if any show called for a live cast recording, it was this one. Still, the Duncan Sheik-Steven Sater score is exceptionally strong. Sheik has provided many gorgeous, infectious melodies and orchestrated them well to season the score’s alternative rock sensibility with small nods to the show’s 19th German setting. Sater’s lyrics have a flair for the poetic, even if there are some frustrating false rhymes (e.g. “sweet and unknown/longing for a home” “all this/my lips”). To date, this is the only cast album of Spring Awakening, and it’s a good one. But let’s hope that future recordings capture a bit more of the show’s spark. — Matt Koplik