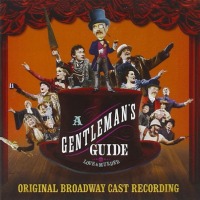 (3 / 5) Based on a novel by Roy Horniman that also inspired the film Kind Hearts and Coronets (1949),  A Gentleman’s Guide to Love and Murder is pure wit and charm, but at a slight cost. The musical tells of an English Everyman, Monty Navarro, who discovers that he’s an heir to the prestigious D’Ysquith family’s fortune and then schemes to bump off each member of the family who stands in the line of succession before him. Though this may sound like nasty stuff, songwriters Robert L Freedman and Steven Lutvak present the story in a highly affected, proper-British, light-operetta manner: Agatha Christie meets Gilbert and Sullivan meets Oscar Wilde. They succeeded in making a fun and clever musical, one for which Lutvak composed many hummable melodies and, with Freedman, some exceptionally witty lyrics. Yet the cast album is a bit of a slow burn for the listener; early songs such as “You’re a D’ysquith” and “Foolish to Think” demonstrate Lutvak and Freedman’s difficulty in creating a strong narrative structure for much of the show’s first act. But as Monty (here played with dewy innocence by Bryce Pinkham) gains more confidence with his schemes, so does the show, and by the time we get to the door-slamming farce “I’ve Decided to Marry You” in Act Two, A Gentleman’s Guide to Love and Murder has risen from commendably intelligent to wonderfully hilarious. The recording boasts a stellar cast: Pinkham glides easily through the score with his silken voice, Lisa O’Hare is perfect as the shallow Sibella, and Lauren Worsham brings operatic flair to the role of the goodhearted Phoebe. Best of all is Jefferson Mays, clearly having a ball playing all eight moribund members of the D’Ysquith family. (This device was carried over from Kind Hearts and Coronets, in which  Alec Guinness plays the victims.) With sophisticated yet daffy orchestrations by Jonathan Tunick to boot, this album offers a great deal of fun to any musical theater fan who’s willing to put in the time and listen through to the end. — Matt Koplik