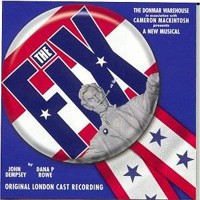 (2 / 5) An American political satire starring a Scotsman and an Australian, The Fix was a succes d’estime in a Sam Mendes-directed production at the Donmar Warehouse in London. That staging earned the show a small cult following and an Olivier Award or two;  but there was no commercial transfer, and except for a regional production in the U.S. a few years later, The Fix has pretty much disappeared. The plot, an insane mélange of politicians, mobsters, drugs, and murder, is practically indescribable. The large cast of the recording is headed by John Barrowman  as the nihilistic, pot-addled scion of a famous clan and Philip Quast as the young man’s gay, crippled, stuttering uncle. They perform the score with aplomb, but there’s not much there. Dana Rowe (music) and John Dempsey (book and lyrics) provided a few good songs, among them the bouncy “Two Guys at Harvard,” the rock-and-roll anthem “One, Two, Three,” and the rollicking “Simple Words.” Inexplicably, the show’s best song — the opening number, “Let the Games Begin” — was left off the album. At any rate, the plot of this musical ultimately becomes too convoluted to follow, and the score suffers for it. — Seth Christenfeld