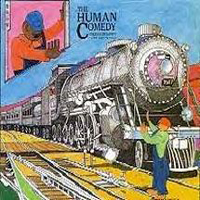 (2 / 5) This show flopped big-time when producer Joseph Papp transferred it to Broadway after a run at his Public Theater. Although billed as “a modern opera by Galt MacDermot and William Dumaresq,” The Human Comedy is really more of an oratorio, complete with a Greek-style chorus. Based on a novel by William Saroyan, this musical tale of a small-town American family during World War II is highly sentimental. Some of the lyrics are poetic, but many are awkward or even nonsensical — for example, “Your voice is in fine, fine fetter.” (What?) However, MacDermot’s music is divine throughout. Among the many highlights: “Ulysses Reaches the Crossing,” “Beautiful Music,” “I’ve Known a Lot of Guys,” and the boogie-woogie duet “I Let Him Kiss Me Once.” The score contains at least two hymns, “When I Am Lost” and “Everlasting,” that have absolutely nothing to do with the action, but they’re so lovely that you probably won’t mind. The cast is a mixed bag: Bonnie Koloc, Stephen Geoffreys, Mary Elizabeth Mastrantonio, and Don Kehr are all fine as various Macauley family members. Also good are Leata Galloway as Diana Steed, Caroline Peyton as Mary Arena, and David Johnson as the trainman. On the other hand, young Josh Blake is almost unlistenable as Ulysses Macauley, and Rex Smith is vocally miscast as Spangler. The sound quality of the recording is odd; apparently, it was made onstage with no audience present. As for the CD edition, be aware that, for some reason, the two discs are not tracked at all, so the only way to access particular songs is to use search buttons on your player. Contributing to the slapdash feel of the enterprise, the accompanying booklet leaves out the recording date and repeatedly misspells Saroyan’s name (as “Saroyen”). The Human Comedy definitely deserves to be heard but, given all that’s wrong with the expensive, privately produced CD set, you’d be better off purchasing the recording in MP3 format. — Michael Portantiere