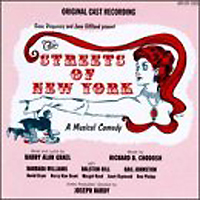 (5 / 5) For a long time, this was an extremely rare recording, so AEI’s CD release was especially welcome. With music by Richard Chodosh and lyrics by Barry Alan Grael, The Streets of New York is based on the famous old play of the same title by Dion Boucicault. Its melodramatic story should keep us at arm’s length from the characters, yet the songs are so compelling that the listener even comes to care about the so-called villains of the piece. The show begins with a through-sung prologue and then moves forward 20 years to 1890; each act concludes with an extended musical sequence utilizing reprises, leitmotifs, and some new melodies. The other 11 numbers represent some of the best musical theater writing of its day. Barbara Williams is deliciously evil if a tad shrill as Alida Bloodgood, giving outstanding performances of “He’ll Come to Me Crawling” and “Laugh After Laugh.” Hero and heroine David Cryer and Gail Johnston sing very well throughout, and particularly in the duet “Love Wins Again.” Ralston Hill is almost Shakespearean as principal villain Gideon Bloodgood, while co-author Grael is funny as the undependable yet finally heroic Badger, leading three Mexicans in the comedic “California.” A wonderful “Tourist Madrigal” reminds us that, in some respects, New York has changed very little over more than a century. Another highlight is the inventive “Where Can the Rich and Poor Be Friends?” It’s all quite delectable. — Jeffrey Dunn