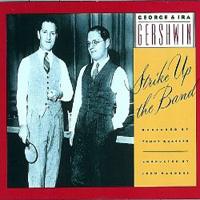 (5 / 5) The “Roxbury Recordings” series of restored Gershwin scores was a mixed bag, but this double CD of Strike Up the Band, recorded here in its unsuccessful 1927 version, is a joy. This was George and Ira Gershwin’s first attempt to actually say something in a musical. They created a plot-heavy but delightful score in perfect synch with the cynical book by George S. Kaufman and Morrie Ryskind. This painstaking reconstruction, with John Mauceri conducting orchestrations by eight different people (!), conveys the excitement of using musical comedy to score political points — a novelty in 1927. The recording is beautifully cast, with Brent Barrett and Rebecca Luker simultaneously sardonic and sincere in “The Man I love” and “Hoping That Someday You’d Care.” Jason Graae and Juliet Lambert are youthful ardor personified in “17 and 21” and “Military Dancing Drill,” while Beth Fowler is delicious in a Margaret Dumont-like role. Don Chastain plays a warmongering industrialist. There are two special bonuses here: a great, rediscovered Gershwin number, “Homeward Bound,” and Burton Lane’s gorgeous music for the verse for “Meadow Serenade” (the Gershwin melody couldn’t be tracked down). An appendix to the album adds six numbers from the rewritten (by Ryskind alone) 1930 version of the show, including the Gershwin perennials “Soon” and “I’ve Got a Crush on You.” The 1927 version may have shuttered in Philadelphia, but it’s a fascinating, acid satire on phony patriotism, unnecessary wars, and the corrupt military-industrial complex. Thank heaven we’ve outgrown such things! — Marc Miller