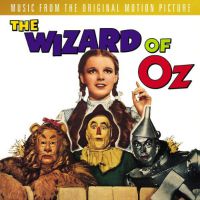 (5 / 5) Is it an overstatement to call MGM’s The Wizard of Oz the world’s most beloved film? Happily, a superb job has been done with the latest edition of the soundtrack recording of this gem, and we owe thanks to Marilee Bradford and Bradley Flanagan for doing it so neatly and completely. Many of us have fond memories of an old MGM “highlights” LP, but here we get all of the music from the movie, in the best possible sound. What’s most impressive is all the musical detail that may be heard clearly for the first time. Yes, we know “Over the Rainbow” and the other great Harold Arlen-E.Y. Harburg songs performed by Judy Garland, Ray Bolger, Jack Haley, Bert Lahr, and Frank Morgan, but the background music by Herbert Stothart represents Hollywood scoring at its peak. Included on the two-CD version of the soundtrack are several other treats: multiple takes of many songs, including one of “Over the Rainbow” that comes to a premature stop with a big sneeze/cough from Garland; the song “Jitterbug,” cut from the film, but tuneful and fun to hear; and the original Buddy Ebsen recording of”If I Only Had a Heart,” made before Ebsen’s reaction to the Tin Man’s aluminum makeup forced his replacement by the far more suitable Haley. Another bonus with the two-disc set is a sumptuous booklet with rare photos and detailed notes. — Richard Barrios 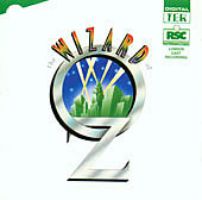 (2 / 5) What was more inevitable than a stage version of the extraordinarily popular MGM film The Wizard of Oz? By the 1960s, productions were cropping up everywhere; one of them even had the wonderful Margaret Hamilton reprising her definitive performance as the Wicked Witch of the West. But the most determined effort to put Oz onstage came in the 1980s, by no less a force than London’s Royal Shakespeare Company. The film’s orchestrations were recreated, its special effects adapted, and variations of this production have been performed numerous times since. The cast recording is in no way comparable to the movie soundtrack, but it’s passable. Conductor John Owen Edwards’ tempi differ from those in the movie, and while the orchestra plays well, the results are somewhat jolting. The cast varies wildly, from a sweet Dorothy (Gillian Bevan) to an undistinguished Scarecrow-Tin Man-Lion trio to a geriatric Glinda (Joyce Grant, who doubles as Aunt Em) and a literal drag of a Miss Gulch/Wicked Witch (the coyly named Bille Brown). Of course, the score itself is imperishable. — R.B. 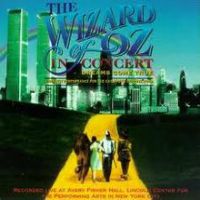 (1 / 5) Roger Daltrey as the Tin Man? Jackson Browne as the Scarecrow? Debra Winger as Miss Gulch and the Witch? Yes indeedy, that was the casting of a televised Lincoln Center concert version of The Wizard of Oz, performed only once for charity. But this recording also gives us Nathan Lane as quite a good Cowardly Lion. Of Browne and Daltrey, it might be said that they try hard. While Winger has some fun with her devilish doings, Natalie Cole’s Glinda sounds extremely tentative. The Boys Choir of Harlem makes sweet sounds as the Munchkins, and the idea of casting Joel Grey as the Wizard was so good that it was carried forward to the Broadway musical “prequel” Wicked. Unfortunately, nothing that’s good about this recording can overcome its terminal handicap: the horrific portrayal of Dorothy by Jewel, with her unending overlay of American Idol-style swoops and gulps. Those who revere “Over the Rainbow” are officially alerted that we’re not in Kansas anymore! — R.B. 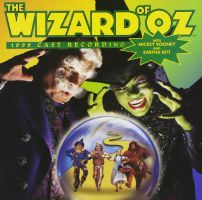 (3 / 5) This version of The Wizard of Oz was adapted from the Royal Shakespeare Company edition and an interim production by the Paper Mill Playhouse. The double role of Professor Marvel/The Wizard was taken by Mickey Rooney, who at age 78 was still a very game performer. As Miss Gulch and the Wicked Witch, Eartha Kitt has the time of her life, funneling her purring persona into this nasty pair. (Thank you, producers, for giving the bewitching Kitt the reinstated “Jitterbug” number, in which the prescient lyricist E. Y. Harburg supplied lots of “r”s to rrrrroll!) While Jessica Grové is a pleasing Dorothy and Lara Teeter a good Scarecrow, Ken Page goes a bit over the top as the Lion. Another problem is the recorded sound, reverberant and bass-ridden. This Oz may not cast the spell of the movie, but it has its own moments of magic. — R.B. 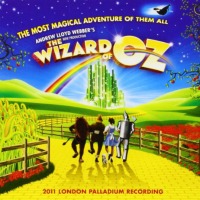 London Cast, 2011 (Verve) No stars; not recommended. If the movie posited  Oz as a dream, why not a bloated stage version of The Wizard of Oz that is, in effect, a nightmare? Surely some of the impetus for this 21st century “reimagining” was the worldwide hit Wicked. Still, why take on such a cherished film, given what must be the widely held opinion — already stated here, above — that no stage production could duplicate, let alone equal, its magic or its cast? Then again, such considerations may be of lesser import to The Right Honourable Andrew, Lord Lloyd-Webber. The Wizard of the West End determined that Oz’s yellow road would benefit from some brick-gilding, which included his writing six new songs with lyrics by Tim Rice; signing the master’s own Phantom, Michael Crawford, for the title role; and casting Dorothy (Danielle Hope) by way of a televised “Over the Rainbow” talent hunt. The result opened at the London Palladium to mixed reviews, with the most praise going to the sets, costumes, and effects. Later, there would later be a Toronto run and a North American tour. (So far, no plans for Broadway. Keep your fingers crossed.) All involved professed their love for the original — but with synthesizer-heavy rearrangements and the unavoidable clash between 1939 and 2011 aesthetics, this show was doomed from the get-go. The offenses are many and unending: a lament for Dorothy called “Nobody Understands Me,” Miss Gulch’s original, immortal “bicycle theme” (by Herbert Stothart) being outfitted with lyrics, the deletion of “If I Were King of the Forest,” a “Red Shoe Blues” (!!) for the Witch, and much, much more. Hope is an OK Dorothy in a chirpy sort of way. Her three farmhand-turned-creature pals tend to sound alike, and Crawford manages a twee sort of authority.  In summary: Remember the adage “There’s no place like home,” and stick with Garland and company. — R.B.