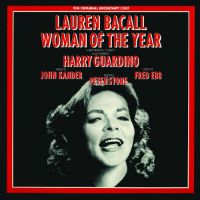 (2 / 5) This is a musicalized update of the famous Hepburn-Tracy movie of the same title, with the plot changed so that it now concerns a television anchorwoman and a cartoonist. The show is not one of composer John Kander and lyricist Fred Ebb’s better efforts. In the title role, Lauren Bacall sings in a foghorn voice that sounds far worse than it did 11 years earlier in Applause, and the star also seems overwhelmed by having too much to do. On the recording, her limitations are clear in every number — such as “When You’re Right, You’re Right,” her apology to the cartoonist (played by Harry Guardino); “One of the Boys,” in which she bonds with him and his colleagues; and “I Wrote the Book,” a pleasant ragtime number save for the fact that Bacall is singing it. Guardino’s big ballad, “Sometimes a Day Goes By,” is rather boring. Three other number delight in their negativity: “It Isn’t Working,” “I Told You So,” and “Shut Up, Gerald.” Just when the whole enterprise seems doomed, out comes Marilyn Cooper to duet with Bacall in “The Grass Is Always Greener,” a wonderful comedic showstopper and the only reason to buy this recording. — Peter Filichia